So What Do Renters Search For These Days?

What do renters want?

So what is it that renters are really looking for these days? You may be surprised by the answers because, according to data from Zoopla’s keyword searches, renters are more concerned about their cars and their pets than they are about themselves when it comes to finding their perfect home. The top search terms were ‘Parking’,‘Garage’ and ‘Pets’. “Furnished’, on the other hand, is down at number 4 and ‘Garden’ is languishing at number 6. 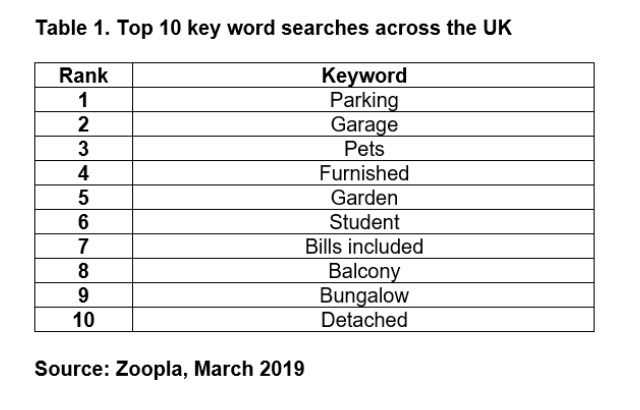 “Parking and garages were a consistent requirement for tenants across the nation.

“While this may not be the most exciting feature of a home, our research clearly shows that landlords can make their properties much more attractive by creating or enhancing existing parking.

“Whether they re-landscape their garden to include a driveway or apply to drop the kerb outside their house, these changes could pay dividends.”

Student accommodation is, clearly, another popular area, at number 6 and, it transpires, we like to keep life simple, because at number 7 were properties where ‘Bills are included’.

For some unknown reason, ‘Balcony’ makes an appearance at number 8 and ‘Bungalow’ and ‘Detached’ were at 9 and 10, respectively.

So, was there much regional variation? Not for ‘Parking’, which was on the top spot everywhere, except the North East which instead had the equally vehicular ‘Garage’ at number 1. And, it seems, we are a nation of animal lovers, because 'Pets' was in the top 3 throughout the UK.

In the prime areas of the country, such as Marylebone, Central London, renters are more demanding, with ‘Ensuite’ and ‘Gym’ making an appearance in their top 10 searches.

Those in North East England and South West England were looking for properties which had an element of country charm, with ‘Rural’ and ‘Cottage’ among the most searched features in both regions, while people in North West England wanted a ‘Garden’ and a ‘Balcony’.

The most popular properties, overall, were 3 bedroom houses, except for London where 2 bedroom flats took top spot.

“Three-bedroom houses appeal to a wide range of buyers and tenants, including young families who are looking for space to grow, as well as downsizers who want a more manageable space that can still accommodate visitors.”

It’s a little odd, though, that proximity to transport links doesn’t feature, especially in metropolitan areas. The number of people applying for car licences is falling rapidly and demand for public transport is rising. The number of teenagers, for example, with a driving licence has plummeted by almost 40% in two decades (source: Dept of Transport). It may just mean, however, that people have done some basic research on transport beforehand, as it's such an important area.

Other articles by Alex

Who’s going to pay for the replacement of dangerous cladding?